Naughty America has been at the forefront of porn’s most promising tech developments for years. From its early efforts in live streaming solo pornstar shows to the introduction of 4K Ultra-HD videos and Virtual Reality episodes, the legendary network is arguably porn’s most aggressive adopter of new tech. With advances in 3D CGI modeling making their way to laypeople’s computer screens, Naughty America has moved into custom user-created animated sex and now invites you to try your hand at playing CGI god with some saucy 3D models. Naughty America’s 3D scene creator is now live and already showcases dozens of wild user creations. 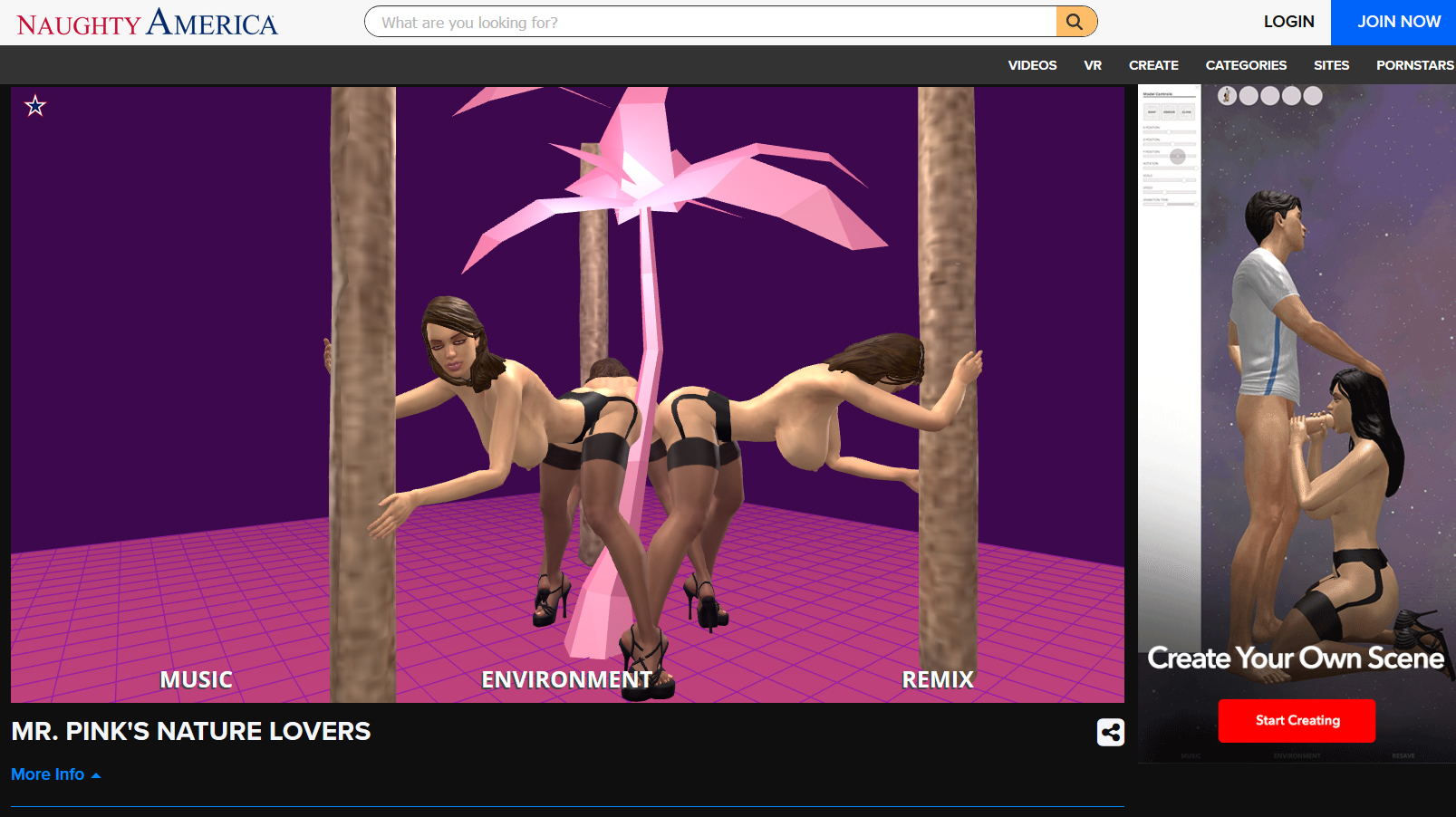 While customization options remain limited to two distinct female models, two distinct males, male/female pairs, a pool table and a palm tree, and while the body types are essentially the same for each gendered model, users can augment their creations with a range of environments and soundtracks.

Considering millions of people around the world are currently self-isolating due to the spread of Human Coronavirus COVID-19, we leaned towards a free natural expression of excitement and arousal in creating the first 3D clip for sharing right here on Mr. Pink’s. A pink palm tree stands in the center of three women, all identical. Bent over to holding a pole for stability, the ladies throw their rears back against the palm tree trunk. Surely too uncomfortable for real life activity, this 3D scene creator takes such an act and not only makes it visible but (kinda sorta) believable. Naughty America’s 3D scene creator is laden with sci-fi style and cartoonish elements but that’s all part of the appeal. Why limit yourself to reality when you’ve got highly customizable 3D characters at your disposal?

Life today is all about expediency and convenience. The more quickly and efficiently something can be achieved, the higher the leg up you’ll have over others. This can be said of shopping (Amazon), cheating on your spouse (Ashley Madison), finding new music (Spotify), and going to the movies (Netflix). It can also be said of beating off to live adult performers. Instead of treading on god knows what in a dark and dingy “gentleman’s club” we’re now given almost unlimited chances to watch sexualized performances from amateurs and pros alike. Among the myriad cam sites aiming to get you off sits Sex Cam Gold.

Scouring a number of major cam services in search of the best range of performers, Sex Cam Gold has assembled a huge array of live adult entertainment. Male and female models, couples and trans broadcasters can all be found here and are available to view free of charge. Prompting a sign-up at Chaturbate should you seek more involvement in the streams, Sex Cam Gold acts as a very efficient and easy-to-use front-end for the immense world of live camming. Just a cursory look at the more popular live rooms broadcasting during the writing of this mini-review led me to a pair of lesbian Latinas using toys, fingertips, and tongues to reach a mutual squirt eruption, a straight hipster couple lazing around in t-shirts before trading oral treats, a beautiful and busty Korean girl dancing around her bedroom in nothing but a thong, live psychedelic ASMR performances, gay male couples in a juicy sixty-nine, and even group sex that follows the commands of the viewers. Claiming to feature approximately 7,000 online performers (again, at time of writing), I see no reason to suspect that number is inaccurate. Sex Cam Gold is expansive, exhaustive and loaded with live sexual entertainment to suit all tastes.

Sex Cam Gold is online now with more than 7000 performers waiting for you.